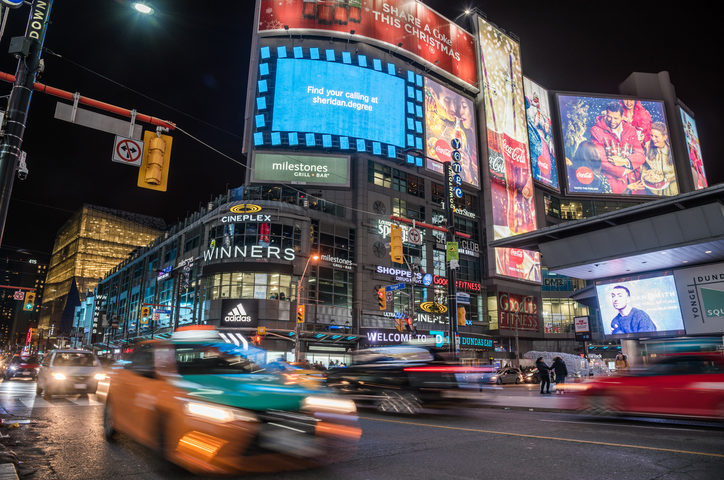 Toronto, Canada - November 18, 2017: Cars in Motion at the Crossroads next to Yonge-Dundas Square at Night. Yonge-Dundas Square is a public square at the southeast corner of the intersection of Yonge Street and Dundas Street East in Downtown Toronto. The square is continuously illuminated by large billboard screens, which has led to comparison of the square with New York City's Times Square and London's Piccadilly Circus.

TORONTO _ The people affected by a deadly van attack in Toronto have a wide range of options for recourse to deal with the fallout because it involved a motor vehicle under the province’s insurance system, lawyers say.

Car insurance is mandatory in Ontario and lawyers say the pedestrians who were hit and their families will first be able to access funds through the driver’s and rental agency’s insurance coverage and if that is not available or enough through their own motor vehicle policies.

Toronto-based insurance lawyer Eric Grossman said if the coverage of the vehicle driver or vehicle owner does not offer enough to cover victims’ needs, pedestrians who are hurt in a collision can make a claim against their personal auto insurance plans, if they have them.

Lawyers say regulations stipulate that car insurance policies must offer a minimum of $200,000 of coverage in scenarios where the other party in the collision is not insured or underinsured, which applies whether the policyholder was in their own vehicle at the time of the incident or not.

Grossman said this means the victims could have more recourse and a deeper pool of funds from which to recover damages compared to mass-casualty attacks that do not involve a motor vehicle.

“Most mass casualty events don’t involve automobiles. And so, people are left with catastrophes on their hands… And there are no opportunities to recover for those damages with any regularity,” he said.

Ottawa-based lawyer David Contant said while the basic minimum coverage for underinsurance situations is $200,000, it can be higher if the victims’ insurance policies included added protection to upwards of $1 million.

On the afternoon of April 23, 10 people were killed and 16 were injured after a man in a rental van drove down the sidewalk along Yonge Street, running down pedestrians.

There has been an outpouring of grief and donations in the wake of the attack and the #TorontoStrong fund established to help with the aftermath has raised more than $2 million, and counting. The fund, established by the City of Toronto, will support victims by covering costs and emergency expenses such as funeral expenses, trauma counselling and child care. Later, the fund will also support organizations and charities which can help with the broader, societal impacts of the attack, according to the Toronto Foundation.

In addition to money raised, the victims of last week’s van attack and eligible family members will also be able to get coverage via the various insurance policies to cover some of the cost associated with funeral expenses and rehabilitation, said Grossman.

Contant said the Insurance Act caps the liability of rental insurers at $1-million (which is reduced by other available insurance from other parties such as the lessee, renter or others connected to the incident).

But in circumstances where neither the driver, the vehicle owner nor the pedestrian struck have automobile insurance, there is an insurer of last resort in Ontario which would cover eligible claims, Grossman explains.

The Motor Vehicle Accident Claims Fund is a government-run organization that is funded by the entire insurance industry to provide benefits in such a collision, he said.

“There are no exclusions in Ontario in terms of access to benefits for intentional acts,” Grossman said.