Halloween poses other stresses or dangers for pets, but candy is high among them. 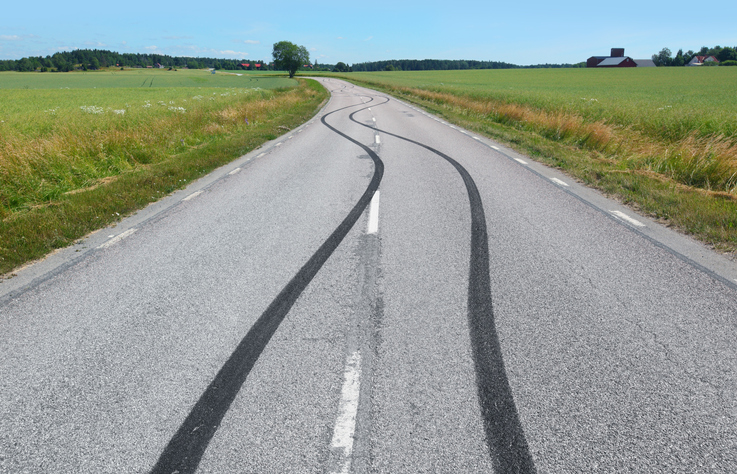 Tire print on the asphalt road

Facts about Speed… Tire marks left on the pavement at a collision scene tell the investigator many things about the events involved in a motor vehicle collision. One common example involves using the length of the mark to calculate pre-collision speed. It was often an interesting exercise that could either verify or call into question information given by witnesses and drivers.

Following my training course the first opportunity that I had to try this out involved an intersection collision. A driver had turned left in front of a taxi. The taxi driver had slammed on the brakes but was unable to avoid hitting the left turning vehicle.

The taxi driver assured me that he had been traveling at the speed limit pre-crash.

I got out my calculator and measuring tape. The calculated speed was over the speed limit and as there was a crash, some of the speed of the taxi did not contibute to the length of the skidmarks.

When I told the taxi driver what I had just done and asked again how fast he was going, he hung his head and said that it was a bit over the limit.

Even more interesting was the opportunity to teach it to a class of physics students at a Qualicum Beach high school.

My supervisor and I started the class by deriving the slide to stop formula from the basic equations the students were learning. Simply put, the speed of the vehicle is equal to 15.9 times the square root of the skid distance multiplied by the coefficient of friction for the road surface. This applies to a level surface and will work for both ABS and non-ABS braking systems.

Next we went to the parking lot where I readied the shot marker on my police vehicle and had one student sit in the passenger seat to verify the speed by watching the radar display. After reaching 50 km/h I braked to create the skid and the shot marker fired a piece of blackboard chalk onto the ground when the brakes were applied. By measuring the distance from the chalk mark to the shot marker at the other end, the exact skid distance was known.

The shot marker is important for accurate distance measurement as the tires take a bit of time to generate enough heat between themselves and the pavement to leave a mark. Some braking is actually done before the beginning of the visible skidmark, so these speed calculations always underestimate the initial speed slightly.

My supervisor led the others through the use of a drag sled, which is essentially a section of tire weighted with lead or concrete inside. Weighing it and then measuring the force required to slide it over the pavement allowed the students to calculate the co-efficient of friction for the road surface.

Back in the classroom we used the formula, the skid distance and the co-efficient of friction to calculate the police vehicle’s initial speed when the brakes were applied. The answer was exactly the speed shown on the radar! While real world collisions are often much more complicated, this was a great opportunity to show the students an application of what they were studying in a manner that they had not considered.

This is the process that was used to teach that section of my collision investigation course and one that is repeated time and again with varying circumstances on testing days. Testing days allow the investigator to gain experience with known data and satisfy the courts of the accuracy of speed calculations undertaken.

DriveSmartBC: Where better than average road users satisfy their curiosity.