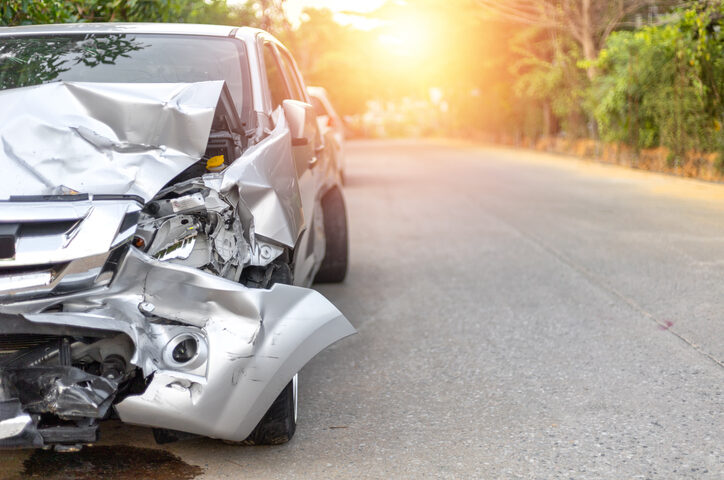 Front of light gray color car with pick up have big damaged and broken by accident on road in morning time can not drive any more park for wait insurance officer. With copy space for text or design

This has been an interesting week for road safety. The Provincial Health Officer has released a report, Where the Rubber Meets the Road: Reducing the Impact of Motor Vehicle Crashes on Health and Well-being in BC, that suggests lower speed limits in residential areas and the return of automated speed enforcement as a means of reducing injury and death on our roads. Tom Fletcher is the legislative reporter for the Black Press in Victoria. He quotes Minister Todd Stone’s response to the report:

“We believe there are more effective technologies that can be employed, and frankly a better way to utilize precious police resources than to resurrect what was largely a failed photo radar program that was nothing more than a tax grab for British Columbians,”

Hearing “nothing more than a tax grab” from Minister Stone tells me that he is positioning himself politically rather than speaking in terms of road safety. Who is “we” and what are those technologies? How does he qualify calling photo radar a failed program, especially when an evaluation by Greg Chen published in Traffic Injury Prevention finds that photo radar in BC was responsible for lowering speeds, reducing collisions and producing an annual net benefit of $114 million for government and $38 million for ICBC. That really means a saving to you and me as these are costs that are covered through taxation and insurance fees that come out of our pockets.

Chen, who is an associate professor at the Baruch College School of Public Affairs, concluded the following:

Automated photo radar traffic safety enforcement can be an effective and efficient means to manage traffic speed, reduce collisions and injuries, and combat the huge resulting economic burden to society. The cost-effectiveness of the program takes on special meaning and urgency when considering the present and future government funding constraints. The application of the program, however, should be planned and implemented with caution. Every effort should be made to focus on and to promote the program on safety improvement grounds. The program can be easily terminated because of political considerations, if the public perceives it as a cash cow to enhance government revenue.

To me, this brings to mind Thomas Sowell’s quote regarding politicians:

“No one will really understand politics until they understand that politicians are not trying to solve our problems. They are trying to solve their own problems — of which getting elected and re-elected are No. 1 and No. 2. Whatever is No. 3 is far behind”.

Dr. Kendall’s prescription for road safety could be a bitter pill for us to swallow collectively but I find it more likely to produce a cure than I do the reaction of Minister Stone. The leading cause of unintentional injury and death in BC is a motor vehicle collision. Collisions cost to our health care system alone $8.8 billion annually. This is three times the cost of our precious police resources, only a relatively small portion of which is dedicated strictly to traffic law enforcement.

I dislike arguing about the political and monetary costs of this issue. While it is important, being safe and not suffering harm from the use of our highways is far more critical on a personal level. Perhaps we can only see this after becoming a victim, assuming that we survive to consider it.