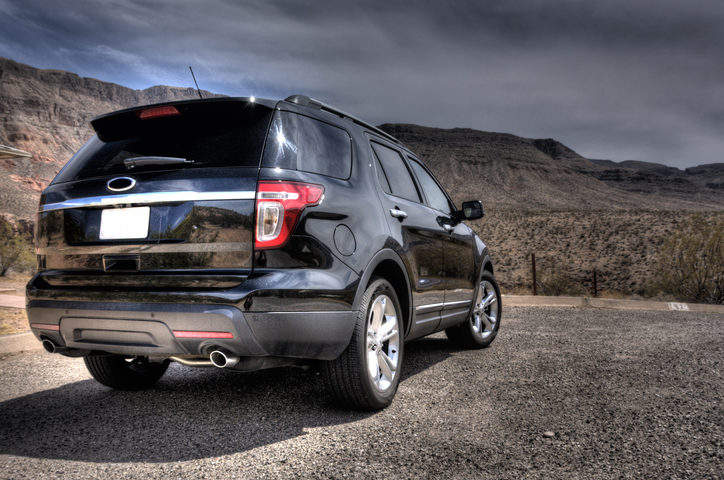 A large, all-American SUV is parked on hot asphalt against a background of desert scrub and mountains under a hot blue sky. Given the HDR treatment to bring out the liquid black gloss of the paintwork.

MEXICO CITY _ Auto worker Ivan Flores spends his days transporting parts for U.S.-bound Audi SUVs at a plant in central Mexico, but he laughs when asked if he could ever buy one of the $40,000 Q5 SUVs the plant produces on his $2.25 per hour salary.

“For us it is a dream to buy a Q5; we never could,” said Flores, 40, who supports three sons on his roughly $110 weekly paycheque.

The premise of the auto industry since the times of Henry Ford was that workers would make enough to buy the cars they produced. Across the U.S. and Europe, the arrival of an auto plant meant the creation of middle-class communities, with employees taking vacations, buying homes, cars, perhaps even cottages and boats.

But in Mexico where the auto industry has boomed under the North American Free Trade Agreement, with plants like the Audi factory that opened in Puebla state in 2016  the industry has created something different: a class of workers who are barely getting by, crammed into tiny 500-square-foot apartments in government-subsidized projects that they pay for over decades. Many can’t afford even a used car, taking home as little as $50 per week after deductions for mortgages and cafeteria meals.

Why have Mexican auto salaries stagnated or declined while pay for Chinese auto workers rose, despite all the promises that North American Free Trade Agreement would increase Mexican wages? That’s the question U.S. negotiators are asking as the third round of NAFTA talks resumes in Ottawa, Canada.

“It’s ironic, right, that he’s always criticizing us, but at the same time, he could do something that benefits us, by exposing the rot in the system” said Audi worker Eduardo Badillo, 34.

The key, in Mexico’s auto industry, may be the so-called. “protection” contracts signed long before plants open.

As in many factories in Mexico, very few of the current Audi workers ever voted for their union leader, and they won’t get any chance to vote for years.

Government records show that on Jan 24, 2014 almost three years before the Sept. 30, 2016, inauguration of the Audi plant the company signed a union contract that specified wages as low as $1.40 per hour, up to $4 per hour. The union says nobody receives the lowest wage, with most earning about $2.25.

So when the plant’s 5,000 workers finally were hired two years later, they were faced with a union and a contract only a handful had voted for. Given Mexico’s lack of good jobs, many do apply, including college graduates. The contract locks in wage increase of about 6 per cent per year which outpaced inflation for a few years but now trails it _ through 2019.

“Everybody knows what the conditions are when they apply. These are the wages, this is the union,” said union chief Alvaro Lopez Vazquez. “You decide. If you don’t like it, you can look elsewhere.”

Lopez Vazquez refused to say how many people took part in the vote when he was elected in 2013; opponents say it was about two dozen. He also said he doesn’t plan to call for any voting assembly or meeting until 2020.

“This is a democratic union, where the workers vote … every six years,” he said.

Lopez Vazquez and the company say the plant pays above-average wages for the sector. The company said it has paid workers bonuses and respects the union.

A Nissan plant in another state pays between $2.40 and $4.75 per hour. But workers at many other plants also get vouchers to buy groceries, which Audi workers don’t. Mexico’s minimum wage which few people make is about 50 cents per hour.

Mexico recently changed its constitution to demand that unions signing labour contracts have to show they have the support of the workers they represent. But there has been little to no enforcement. The Labor Department refused requests for comment.

Alex Covarrubias, a labour professor at Mexico’s Sonora College, said such “protection” contracts are almost universal in Mexico. “Almost all the (labour) contracts that are signed in Mexico are unlawful, which means that they are company contracts, which the workers aren’t aware of.”

Low wages _ along with closeness to U.S. markets _ are the key attractions that have drawn automakers such as Audi, Kia, Mazda, Toyota and BMW to open plants in Mexico over the last couple of years.

Lopez Vazquez, the union leader, noted that other companies pay less than Audi. In March 2016, he said, BMW signed a pre-opening labour contract for its plant that says workers can earn as little as $1.00 per hour, with a maximum of $2.30.

BMW said in a statement,  “Our salary package, the mix of daily wages and benefits, is competitive and is in accordance with the region and the market.”

As in the United States, governments have bent over backward to attract plants, offering land, infrastructure and tax breaks. The state of Puebla is even creating a new “model city” on greenfields near the Audi plant, though its new, largely empty apartment blocks are too expensive for most of the plant’s workers.

Lopez Vazquez also implied that a compliant union was part of the package of attractions to get the plant in Puebla, saying, “If we hadn’t formed this union and gotten this contract, Audi might have gone somewhere else.”

“We have a win-win philosophy. If the company does well, everybody does well,” Lopez Vazquez said. He said the low level of wages is explained by the differences in the cost of living in Mexico. “We couldn’t make what they (U.S. autoworkers) make. We’d be millionaires.”

Badillo, the Audi worker, said he’d be satisfied making half the $34 an hour received by U.S. autoworkers.

Badillo is typical of the plant’s employees. He works in the paint shop, and lives with his son, Alejandro, 13, and daughter Noemi, 11, in a tiny 500 square-foot (47 square meter) government-subsidized apartment that he’ll be paying off for decades.

Like many of the Audi employees, he has some college education _ he started a bachelors’ degree in electronics _ and he makes about $120 per week. His wife works in a department store, making less than he does. After paying their mortgage, utilities and taxes, they might have $50 per week to spend on food, entertainment and schools supplies.

Wage rates are so low now that even auto companies from China _ where average manufacturing wages rose to $3.60 per hour in 2016_ are beginning to set up plants here.

Badillo said the persistence of such low wages makes him fear for the country.