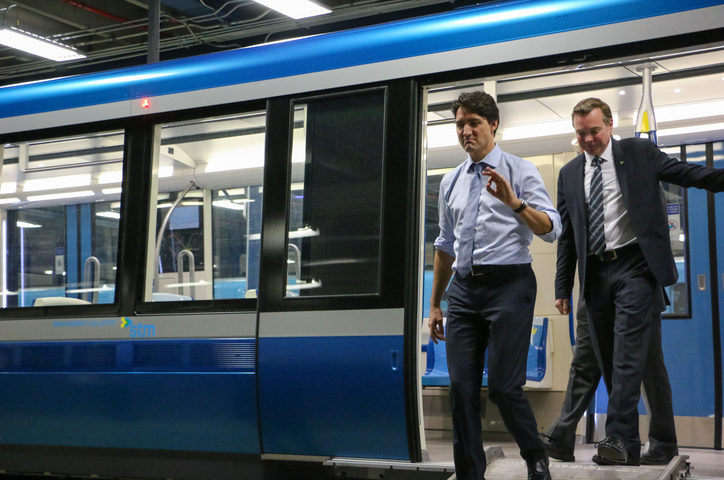 Montreal, Canada - April 6, 2016: PM Justin Trudeau and Philippe Schnobb, chairman of the board at the STM (Societe de transport de Montreal), get out of the new Azur train for a visit of the public transit installations.

NEW YORK _ Prime Minister Justin Trudeau says putting federal cash down as an insurance policy of sorts to get the Trans Mountain pipeline expansion built is the result of an exceptional political situation.

Speaking in New York City a day after his government announced it would compensate Kinder Morgan for any delays in construction caused by political problems, Trudeau says he has every confidence the pipeline will proceed.

Kinder Morgan halted non-essential spending on the project in April because of pending legal questions by the government of British Columbia and the federal government now has just two more weeks to come to an agreement with the company before its May 31 deadline.

Finance Minister Bill Morneau said Wednesday that if Kinder Morgan won’t build the pipeline there are others that will step in, but Trudeau says he was not meeting with any such folks on this trip.

Although he has met with more than a dozen different business executives, pension fund managers and CEOs in the last 24 hours as he tries to instill new confidence for investors looking at Canada, Trudeau says he is leaving the pipeline talks to Morneau.

Trudeau says Morneau has made many different contacts with people in the Canadian and global energy industries and continues to have robust conversations with Kinder Morgan as well.