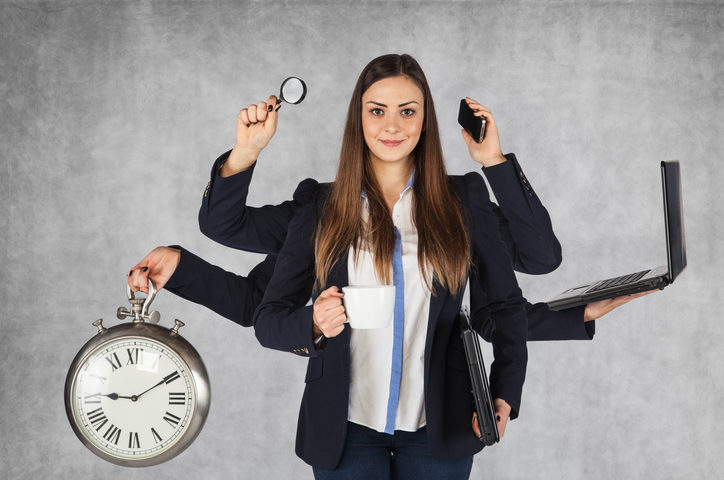 multi-purpose business woman with a large number of hands

Workaholism is more than a dedication to your job. It’s a near-obsessive commitment that supersedes most, if not all, other aspects of life. For many, workaholism is a true addiction, inextricably tied to feelings of self worth and identity.

What are some characteristics of workaholics? How could a person tell that he/she is a workaholic?

A workaholic displays symptoms similar to any other addict. He/she works long hours, at the expense of personal relationships and health. When not working, they’re thinking about work. Work dictates their mood: when work is going well, they’re up; when work is going less well, they’re down. Workaholics often go months without seeing friends; put their marriages on cruise control; defend their choice to work as hard as they do (come up with justification after justification); and may use work as a distraction from other problems or aspects of life.

What are some reasons that workaholics work so hard?

Working, or simply being busy, can be a hard habit to break. Busy people are important people. They’re also often pleasantly distracted people. In an op-ed that went viral in the New York Times a few years ago, a cartoonist named Tim Kreider wrote that “Busyness serves as a kind of existential reassurance, a hedge against emptiness.” When workaholics aren’t busy working — or doing something to promote their work — they feel anxious and guilty. For both men and women, this is often a result of recession — they hang onto jobs for dear life and do everything they can to ensure they’re indispensable. For  women in particular, workaholism may stem from the lingering notion that great opportunities for women are still rarer than they are for men, and as such must be strived for with unflagging determination and drive. What’s more, today’s female employees are among the first generation to have been raised by mothers who, as a whole, placed importance not just on a job, but a career. For many of these women, the slide into workaholism seems almost predisposed.

Is there a link between health problems and workaholism?

There is. Just because work itself is a respectable pursuit doesn’t mean that an addiction to it is any less damaging than other sorts of addictions. A number of studies show that workaholism has been associated with a wide range of health problems, such as insomnia, anxiety, and heart disease.

Besides from health problems, does being a workaholic bring negative effects?

Yes. For some people, working serves as a Band-Aid for other issues, a way to numb undesirable feelings or fill certain voids, much in the way that alcohol might do for an alcoholic or sex for a sex addict. What’s more, working too much can lead to lower job satisfaction, as found in a 2008 study published in The Psychologist Manager Journal that compared overworking employees to those who maintained a better work-life balance. Also, the ill effects are contagious: A study published in the International Journal of Stress Management found that workaholics can even make their co-workers stressed.

What about the effects to the families?

A 2001 study published in the American Journal of Family Therapy found that working too much negatively impacted an employee’s marriage. This isn’t surprising, since if you’re married to your work it can be difficult to be married to anything, or anyone, else. There have also been studies looking at the impact of workaholic parents on their children and the news isn’t good. In one study, adult children of workaholic fathers experienced more depression and anxiety and a weaker sense of self. That study appeared in the American Journal of Family Therapy.

What about the positive side?

There are many positive aspects to working hard and to an increasing commitment to career. These days, more and more people, women especially, are embarking on, and staying with, careers that are personally fulfilling, identity making, and lucrative. Hard work can reap great rewards. For many, it’s how they develop feelings of self worth and confidence and purpose. This can be empowering.

Since many workaholics often deny having a problem, what are solutions for them?

It’s difficult to convince a workaholic to change their behavior if they’re not also willing. If you have a workaholic in your life you might point out the things he or she is missing out on while at work, whether it’s a child’s soccer game, a good book, or a yoga class. Seek to understand why the person feels the need to work so much and support them in finding a resolution. Perhaps they feel pressure to earn money, or they feel insecure about their performance. Work together to find ways to handle the dilemma beyond longer hours at the office. For people who wonder if they might be workaholics, I might suggest they resolve to check in every so often and ask themselves: Am I working too hard? And if so, why? What am I getting out of 60 hours that I couldn’t get out of 40? Or 35? Many who work hard are working for reasons beyond the benefits good work provides but it requires really stopping and evaluating the situation to recognize that.

Can the symptoms get better?

They can, but it almost always requires a total overhaul in perspective. The first step is acknowledging and accepting — really accepting — that work isn’t the most important thing in your life. Decide what is. You won’t be able to say “no” to work unless you are saying “yes” to something else. The second step is actually starting to say no — to working late, to extra assignments, to doing a little more ‘for the team.’ Finish one task before taking on another. Third, be firm and vigilant about the time you spend working. Decide in advance that you will work, say, 8 a.m. to 4 p.m., or no more than 40 hours a week. Often, you will find that limiting the time you have to spend on work will make you more efficient during those working hours. You’ll get just as much done — because you have to — and still have time to have dinner with the family.

Stay tuned to the latest in Insurance news by subscribing to ILStv’s daily or weekly newsletters.

Get back on the road with a FREE High Risk Auto Insurance Quote and obtain the auto insurance policy you and your family need.