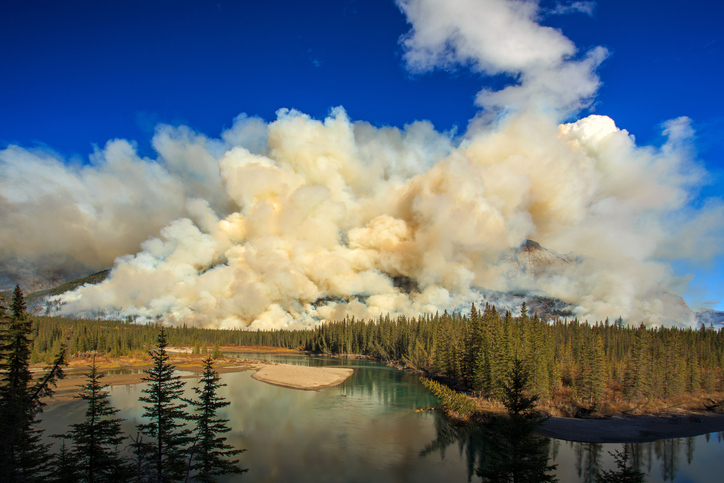 We saw the fire spreading on the whole mountain in a valley. I was worried about the plants and animals in this area. But it advances the metabolism of the Rocky Mt. The saplings will cover this area in the next year.

The wildfires in Fort McMurray, Alta., and flooding in Atlantic Canada were driving factors behind a record $4.9 billion in insurable damage last year, the Insurance Bureau of Canada said Friday, January 6, 2017.

The industry group said the estimated insurable damage toll was about $1.7 billion higher than the previous full-year record of $3.2 billion set in 2013.

Canada’s most costly disaster last year was the northern Alberta wildfire that forced the evacuation of Fort McMurray and surrounding areas, reducing to charred rubble 1,800 single-family homes and numerous other structures including buildings containing about 600 apartments or condo units.

The hit to insurers from the fires was estimated at $3.7 billion, three-quarters of the national total for the year and twice as expensive as the previous most-expensive natural disaster in Canada on record.

But the bureau also highlighted floods that destroyed houses and washed out roads in parts of Nova Scotia and Newfoundland over the Thanksgiving weekend last year, causing about $100 million in insurable damage.

It cited other disasters including March ice storms in southern Ontario that left thousands without power and a July hail storm in Moose Jaw, Sask., that caused $71 million in damage to vehicles, houses and other property.

“The weather continues to worsen and (Canadians) continue to be affected by these storms,” said Insurance Bureau CEO Don Forgeron, adding at least 12 storms in 2016 resulted in damage of over $1 million.

“Governments need to focus on what we describe as adaptation issues, how do we help Canadians better prepare, both physically and financially, for the effects of climate change.”

Forgeron said governments are adopting policies to restrict greenhouse gas emissions, but not spending enough time and money on planning for the severe weather that climate change is already causing in Canada.

He added that payouts are a key component in determining future insurance premiums, but no single disaster or year of disasters will necessarily result in higher costs to consumers.

In an audit published last May, the federal environment and sustainable development commissioner recommended that the National Building Code be updated to account for severe weather events stemming from climate change.

In an email on Friday, Philip Rizcallah, director of construction research for the National Research Council of Canada, said the Canadian Commission on Building and Fire Codes is looking at data from the Fort McMurray wildfire in order to develop possible changes for the next publication in 2020.

He said proposed changes to the national codes, which were last updated in 2015, must be reviewed by several government and independent committees before being adopted.

Spokesman David Foster of the Canadian Home Builders Association said he’s been pleased with government efforts to work with industry on changes to building codes, land use policies and other issues regarding disaster preparation, adding the key to making effective changes is investing in proper research first.